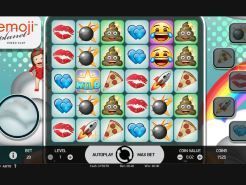 Play Now
Whether you are on social media or just sending a text from your smartphone, you are probably more than familiar with emoji’s, a picture icon which intends to add subtle emotional emphasis to a virtual conversation. It does not matter how old or how young you are, if you have used a smart device you are probably familiar with these icons and how they are understood by humans to communicate without words. Emoji’s originated in Japan in the 1990’s by a fellow named Shigetaka Kurita with about 80 picture icons to originally choose from. This number has boosted to well over 1,000+ pictographs to use in your virtual arsenal today. It is this culture of emoji use that has prompted Emoji Planet Slots to come to life, a fun online game centered around clumping groups of these emoji’s together into larger groups to acquire wins. Created by NetEnt, an online casino software producer and provider, originally launched in the summer of 2017. The game itself will make you feel like you are right at home with your smartphone in hand, as an explosion of color and game sounds immediately flood your senses as soon as you pull up the game. There are many animated moving parts and objects that are constantly shifting and changing positions all over the background. This game is composed of 5 reels and 6 rows, playable from 20p a spin on all devices. It also contains the Avalanche feature meaning you can win again and again from each cascade. It also comes equipped with 5 Emoji features that are triggered when you fill the corresponding meter with enough matching emoji’s. When you get a cluster win, that is when you will start an Avalanche, the winning symbols then explode and disappear to leave spaces which are then taken over by new symbols. This is how you can win again and again. There are 5 meters, the Bomb meter, Pizza meter, Kiss Mark meter, the Rocket meter, and the Two Hearts meter. When you destroy and break apart the symbol, the corresponding emoji meter is filled by a single space. When an Emoji meter is filled up by 12 spaces, the original corresponding emoji is triggered. You can also track all of this progress within the game, however you must fill a relevant meter on each spin to do this, otherwise there is nothing to track. There are wins up to 5,000x your stake on each cascade, which is a pretty remarkable return on your initial investment if you win! You can play this game anywhere that you can pull up emoji’s, your desktop computer, laptop, tablet, or mobile phone so there is no reason you cannot get access where and when you want it! NetEnt did a great job at fully optimizing this game so that it is the same fun experience across all platforms. Overall, this game is a fun mix between the cultural use of emoji’s in the virtual world, combined with the fun of gambling and online gaming. It is for the modest and pro online casino player, with small or large bids per spin!
Play Now